Adapted from the original by Clement Clarke Moore

‘Twas the night before Christmas, when all through the school

Not a power drill was running, not one single tool.

The stockings were hung by the chalkboard with care,

In hopes that St. Nicholas soon would be there;

The pets were nestles all snug in their beds

While vision of scoobi-snacks danced in their heads.

And mamma in her PJs and I in my cap

Had just settled our brains for a long evenings nap.

When out in the schoolyard there a Rose Suchak ladder

I sprang from the recliner to see what was the matter.

Away to the window I flew like a flash,

Tore open the curtains and threw up the sash.

The moon on the breast of the new-fallen snow,

Gave a lustre of midday to the flagpole below.

When what to my wondering eyes did appear

But a miniature Ranger and eight white-tail deer

With a little old driver so lively and quick

I knew in a moment he must be St. Nick.

And then in a twinkling I heard on the roof

The prancing and pawing of each little hoof

As I drew in my head and was turning around,

Down the bell tower St Nicholas came with a bound.

He was dressed all in camo from his head to his foot,

And his clothes were all covered in chalk dust and soot.

He had a broad face and like us, a round belly

That shakes when we laugh like a bowl full of jelly.

He was chubby and plum, a right holly old elf,

And I laughed when I saw rim, reminded of myself.

A wink of his eye and a twist of his head

Soon gave me to know I had no new work ahead.

He spoke not a word but went straight to his work

And filled all the stockings then turned with a jerk

And laying a finger aside of his nose

And giving a nod up the bell tower he rose.

He paused just a moment, and in a whisper, not shout

Declared that the journey has been what it’s about.

And I heard him explain ere he drove out of sight

Happy Christmas to all, and to all a good night!

Janelle
Janelle currently resides in 'the country', WI. She grew up in Gothenburg, NE and spent several years on the move with the Army, then to Omaha and MN. She works for a medical health information publisher in her regular time and spends her weekends at the School. 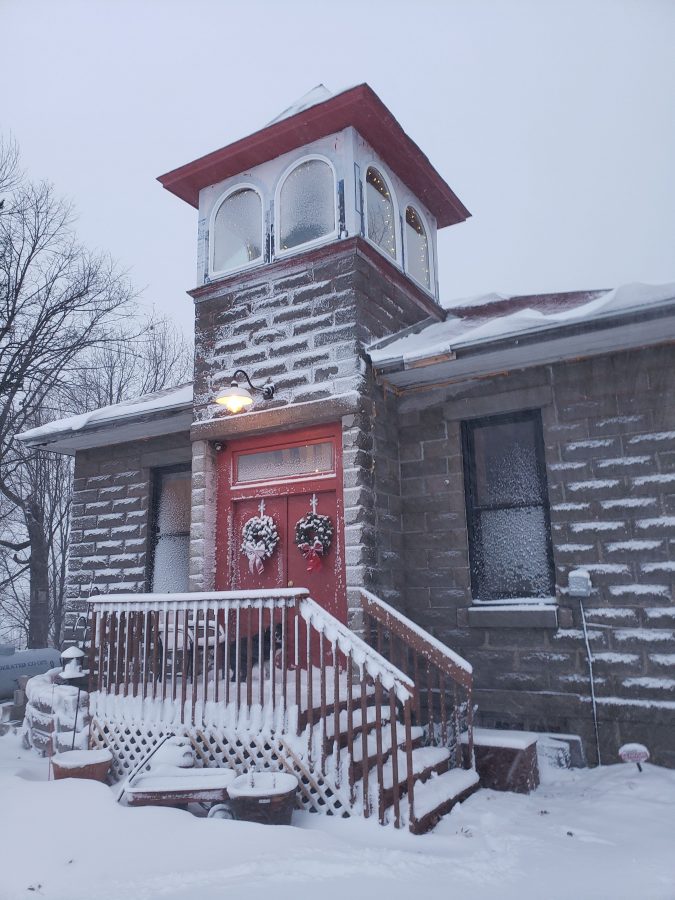 Gallery of Photos – the School

The End, and the beginning